Return to Blog
Posted on February 27th, 2017 by Anna Redding

I’ve been thinking about this a lot lately. Even though I ‘teach’ acceptance as a skill, it’s something that I have sometimes struggled with myself; to ‘accept’ some of life’s events. When I hear about some of the things that my clients have been through, are going through and might continue to face, I’m sometimes amazed at how they keep going. 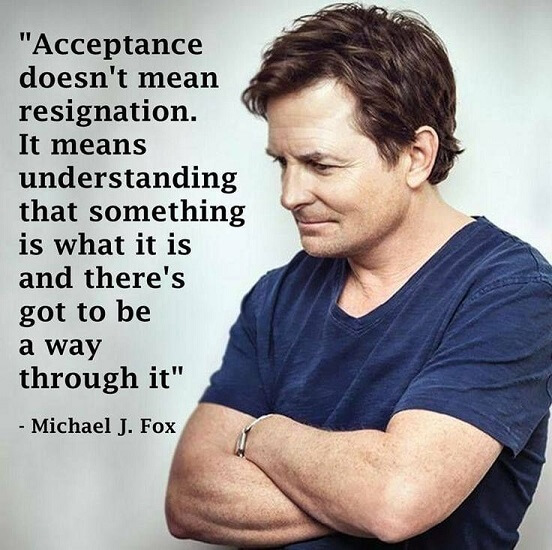 So I thought I’d try to learn more about it. Marsha Linehan coined the term “radical acceptance” as a key skill in Dialectical Behaviour Therapy (DBT; 1993).  The quote above captures it nicely; acceptance means accepting something we can not change. It’s not about saying what happened (or is happening) is OK, but saying that something is the way it is. ‘Radical’ acceptance is fully experiencing the reality of the moment. It’s the difference between pain and suffering: “The bottom line is that if you are in hell, the only way out is to go through a period of sustained misery.

Misery is, of course, much better than hell, but it is painful nonetheless. By refusing to accept the misery that it takes to climb out of hell, you end up falling back into hell repeatedly, only to have to start over and over again” (Linehan, 2015, p.461) More on this in a minute.

When I went to Marsha Linehan’s conference in London, 2015 she spoke about how the concept came about. She was wanting to find a therapy that would help the people who were the most ‘miserable’. So, she read everything she knew about those people who had been through the most traumatic experiences she could imagine: those who had survived the Holocaust. How did people survive one of the most horrific events in history? Well, in amongst a whole lot of luck (and it’s so important to remember that luck was a huge factor in this!), those who survived and went on to live a life worth living, were those who accepted what was happening to them.  Now, remember that radical acceptance doesn’t mean something is acceptable or that you are “giving in”, it means you accept that what is happening is, and that there is nothing you can do about it in this moment.

When I first thought about this, I really struggled to get my head around it, I mean, how does a person even begin to accept that a group of people are focussed on wiping out an entire race? Then I got to thinking, what is the alternative? Give up? Many did and either died or committed suicide. Rage that it shouldn’t be so? Understandable, but then you get shot. Refuse to partake? Refuse to get up and work? Well then you get shot too. So you have to carry on, accept that they have the power and to fight inside as best you can.

One thing I’m learning is that this concept takes practice and is something I think I’ll have to continue to practice, especially when the thing we are trying to accept is very painful, for example the death of a loved one. Acceptance is sometimes something we strive for each day, not quite something to tick off and say “I’ve done that I can stop now”. Depending on what it is we are trying to accept, how we respond to it, i.e. how accepting we are of it can feel a bit like a pendulum swing, sometimes I achieve it and feel more peaceful, other times I’m caught in the battle.

Now, hopefully we never see something like the Holocaust again but sadly, people all over the world are going through traumas. However, even for those who aren’t, life can have its challenges. Whilst we battle with them and refuse to accept, we rage, we argue, we deny. But as we do this, how much space is left over in our lives to do anything else? How much of the world can you see when you can only focus on the pain and wishing it wasn’t so.

For me, I think this begins to tie in with your life values. Who do you want to be after these events, or even during. Do we want to hold onto to something, become bitter about it, churn over how it never should have happened? This may well form part of the healing process and we’ve all done this at some point, but then how long do we want to do this for and what does it cost us? What kind of things do we want and need in our lives to make them fulfilling? Marsha states that part of radical acceptance is that “life can be worth living, even if there is pain”, (Linehan, 2015, p.457). So radical acceptance includes making space for this pain and being with it, whilst continuing to do the things that you need in life to make it fulfilling. We are more than our pain, or the thing we are trying to accept.

So how do we do it, this thing called acceptance? We start small. This is not the time to try and accept the biggest thing in your life. Start with accepting the queue at Sainsbury’s, that you are running late, that you can’t go out with your friends because you have the flu. Try to notice when you are not accepting something and how that feels. Then practice taking a deep breath and being with the situation, without try to change it. For example, being stuck in traffic. No amount of shouting or huffing will make the traffic move any quicker (believe me I huff enough to blow the house down but the cars don’t move any quicker!). The only one getting stressed is you. What would it be like to accept that the traffic is there, there is nothing you can do about it and you’ll get to your destination when you get there. When we can do this, we’re still stuck in traffic, but suddenly we’re less stressed and our life opens up to other things that are going on because we’re less focussed on trying to change the traffic. So we could tune into a podcast, listen to the radio a CD and really notice them.

Start here and see how you get on. I’ll gather some skills and write more about how to do this thing called acceptance in the next blog.